The Portrait of a Marriage

With the Democratic Convention and then John McCain's vice presidential pick announced this week, I didn't pay much attention to other news. So, this morning as I sipped French Vanilla coffee and watched This Week with George Stephanopolous (I would totally leave Rowdy for 15 minutes alone with that hot Greek in a closet....shishhhh), my heart broke when they reported that Del Martin had died.
Del was 87 and had certainly lived a full life as one of our nation's greatest civil rights leaders. Just three short months ago, she and her partner of 55 years, Phyllis Lyon, become the first same-sex couple married in California....again. The pair had wed once before, but their marriage was annulled by a bunch of judges, most of whom have failed in sustaining a relationship a quarter of the time Phyllis and Del have.
I don't really recall how these two women first came on my radar. In between their work as founders of the nation's first gay and lesbian magazine, The Ladder, and organizing multiple civil rights groups, they are really hard to miss.
I've always held an admiration for trail blazers, for those who go against the grain even at the risk of persecution. While I believe Phyllis and Del have been heroes of the highest proportion for consistently putting the good of the whole before themselves time and time again, my true regard comes from their dedication to each other.
In each book and article I read about the two of them, in each show or documentary telling their love story, they had the same statement: that from the time they first met each other in Seattle in 1953, they both knew the other would always be their partner. It wasn't a conscious decision, just like you don't make a conscious decision for your left arm to be your left arm. They were part of each other in a way that couldn't be severed.
So, since I embarked upon my own adventures in marriage nearly five years ago, I have channeled the commitment of Phyllis and Del on many occasions. To me, it's not an issue of sexuality. There are heterosexual couples like us that I could seek advice from and there have been many times that I have. But, with Phyllis and Del, they've never seen their love as a choice. It just was. And, that's what I want for my own marriage.
In one of the documentaries I watched on the two ladies, they both acknowledged that the other had, on many occasions, frankly pissed the other off. They lived together, they worked together. It would be impossible through 55 years of living so closely to another human being, sharing the same air and the same money, not to get peeved at times. But, the idea of separating, of existing apart, was never even thought of. Through too many arguments to count, times when I thought I might kill Rowdy if I didn't get away from him, I've drawn on the wisdom of Phyllis and Del. At a time when most marriages have little shot of making it past the first few years, largely because of our wildly unrealistic notions of matrimony, Phyllis and Del have taught us that true romance isn't glitzy and exciting. Rather, it is dependability, curled up on the couch watching re-runs on a Sunday afternoon dependable, sitting for hours in a hospital room dependable. Any first kiss under the stars is going to take our breath away, or at least many of them will. It's what comes after that, when you've climbed every new and exciting milestone and it's just the two of you that molds into what Phyllis and Del shared for 55 years.
I'm still new to marriage. As the road of life goes, we've just pulled out of the driveway. And, truthfully, I don't know if we will have the same success as my two marital heroes. Really, who does? But, when the times are hard, and I know some will be, I'll be thankful that I stumbled upon the story of Phyllis and Del, two of the great lovers of our time. From the openness in the relationship, especially at a time when so many fail, I thank them. And, for Phyllis, who at the age of 83 is living for the first time in 55 years without her spouse, my heart and prayers are with you.

Ever since I met Del 55 years ago, I could never imagine a day would come when she wouldn't be by my side. I also never imagined there would be a day that we would actually be able to get married. I am devastated, but I take some solace in knowing we were able to enjoy the ultimate rite of love and commitment before she passed. --Phyllis Lyon 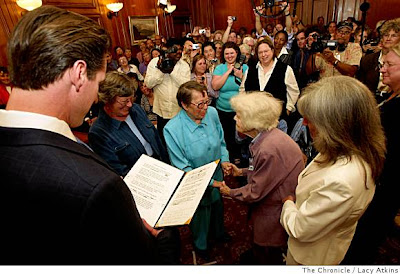 That is a beautiful story and tribute, thanks for sharing this Shonda, they are quite an inspiration when it comes to relationships.

I had read an article about these two lovely women recently, so reading that Del has passed is heartbreaking. My husband and I have gone round and round on the same sex marriage thing. Phyllis and Del are simply two individuals who loved each other. Plain and simple. I'd like to live in a world when it was ok for us just to always be with the person who makes us the happiest.

Thank you for sharing this. It is a lovely story.

Adding my thanks for this beautiful post. The best stories of all are stories of true love.

They were truly amazing! It's wonderful that they were FINALLY able to be legally married. Too bad it too so freaking long.