The Water is Nice, Come on In! 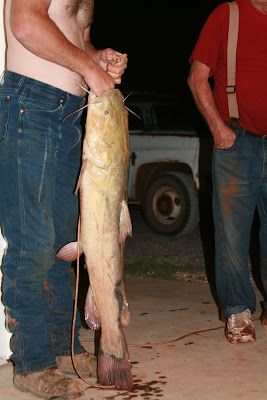 (None of these men are Mrs. Cowboy Chronicles. They are, however, Rowdy's friends.)

If'n you ain't figured it out by now, we's a lil' country.
If you aren't convinced, which would clearly indicate that you are deaf and/or blind, I'll throw out some random hillbilly stats:

~My husband's first name was inspired by Clint Eastwood's character in the TV series Rawhide, Rowdy Yates. As much as it pains me to admit it, Rowdy talked me into Rolan's name because, I shit you not, the theme song for that series was the "Rollin,' Rollin,' Rollin,' keep them doggies rollin,' RAWHIDE!" Seriously.

~Rowdy not only makes his living cutting nuts out of bulls, but he refers to the ballsy delicacy (I'm being cavalier with delicacy, eh?) as his "Breakfast of Champions." Once when I asked him what the benefit of all the nut cutting is, my ever-witty man explained that it takes their minds of ass and onto the grass.

~I no longer find grown men gathering in swarms to yank 20+ pound fish from a river bizarre. To quote one of these angling poets, "I told my son noodling is just like dating. If you stick your hand in a dark hole, it might come out smelling a little fishy." I can't believe Hallmark isn't printing that up my the millions for Valentine's Day.

I've been put in some twisted fishing spot protection program, so I can't print the location where this giant, kid-sized fish was snagged or my house will be surrounded by a herd of angry, sunburned men in macro-made, fringed shorts. (Love you guys!)
I have already been planning to post these photos taken earlier this week, but my quirky son Ridge spouted off something yesterday that I thought went well with all this. Probably explains his thinking, really.
Ridge will be 4 in November, so he has been swimming quite a few times, but the occurrence has grown exponentially this summer. Of course, living on the Washita River, the boys are constantly belly-aching to go down there to fish, splash around and throw mud at one another. You know cleaning that shit out of their ears is dream for all mothers.
Ridge spent the day after this monster and 3 of his similarly-sized scaly friends were plucked from a deep hole beneath the water's banks staring awestruck at the photos. Periodically he'd call it to my attention, his eyes big like half dollars.
Now, all of this might have nothing to do with perhaps one of the funniest things he has ever said, which I was sadly not present for. But, keep it in mind as I lay this out.
Yesterday afternoon Ridge went swimming at my sister-in-law's with his grandma and three cousins.
When they first arrived, my normally aquatic water boy panicked, shaking his head and protesting any possible dip in the pool. So you know, Ridge will go straight Dustin Hoffman in Rain Man if something freaks him out.
Naturally, he calmed down pretty quickly as he eased into the water, first a toe then a leg. For the next couple of hours, his 15-year-old cousin Dakota served dutifully as his personal motor boat.
Just as Grandma was rounding he and his 4-year-old cousin up to come home, Ridge gleefully hugged Dakota, face bright with excited relief, his eyes dancing with giddy relief and declared,

I'm not going to die! I'm going to live!

Isn't that the funniest shit you've heard in at least week?

Okay that noodling line OMG...I started laughing so hard...it's so BAD! But I laughed of course.

That was the funniest thing a boy can say in his entire life.
And that noodling thing freaked me out again, what's wrong with you guys living in OK? dont you really need your fingers! :-p

Hey thanks for your comments on my blog. I will look forward to reading yours too :-)