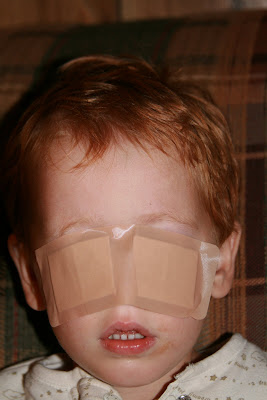 As I was massaging my hard working man's back, Ridge watched periodically instructing me upon more efficient ways to perform the task at hand. He inherited his father's managerial skills and, by that I mean Rowdy's keen craft of bossing others around without them realizing it. Isn't that right, Brother Chad?
I smoothed burning muscle cream on Rowdy's back, rubbing his back as though I was kneading bread while his skin absorbed the cream absorbed it. After a few minutes of working his tight muscles with my hands, I whipped out the hand massager I purchased at Bath and Body Works. A small, red plastic contraption, the massager is a hand-held plastic spider with balls on each of its four legs. With the handle in my hand, I pressed hard against his flesh, rotating the cheap fix-it-all over the pain caused by Rowdy's never-ending labor.
After a few minutes of the forceful caress of the red spider, I put it down to squirt more muscle cream. Through all of this, Ridge was sitting on Rowdy's other side, overseeing and critiquing my job performance.
I looked up just in time to see Ridge sticking two of the legs of the massager against his eyes. Quickly I yanked it from him, hoping he hadn't gotten it close enough to his eyes for contact. Yea, I was wrong about that.
No more than 30 seconds later, he cried out that his eyes were burning. I tried to explain that he shouldn't rub them, that rubbing them would only make it worse. If you've ever had Icy Hot in your eyes, you know how hard that would be. Now imagine if you were 3.
Rowdy jumped up from the ground and soaked a few towels in cold water as I pulled Ridge into my lap. I laid one across both his eyes and squeezed water from one of the others onto it. Every few seconds this would provide enough relief for him to stop crying, but then the scorching muscle cream would come back with a vengeance.
A year or so ago, Ridge discovered the ever-healing power of Band Aids. If he falls down, whether he's bleeding or not, he must have a Band Aid. If his brother scratches him, you guessed it, he must have a Band Aid.
So, as soon as he composed himself enough to process a thought, he began demanding his trusty cure-all. I tried to explain that a Band Aid would likely get stuck in his eye lashes or, worse, eye brows, but he didn't care. He was convinced that his eyes would be healed if only I would answer his pleas.
After a minute of this back-and-forth conversation, I decided no harm would done besides a few plucked facial hairs and, frankly, that would be a cornucopia compared to the muscle cream in the eyes.
I placed one then the other over his blazing eyeballs. He continued to sob for another minute or two and then informed me that he was, in fact, all better.
Before that happened, though, I snapped a few pictures. As I snapped them, I thought it might be cruel photographing this corrosive experience for my baby boy, but I knew I would be glad I did. And, I certainly am.
When I uploaded these pictures yesterday, Ridge spied them over my shoulder. Pointing to himself, eyes totally concealed, and told me he was a pirate. Silly boy!
***No eyelashes were harmed in this production.***

Grimacing at the thought of icy hot in my eyes, ouch!

hey lady-
my e-mail is down. ARGH!!! This is the 3rd time this month that the MAC servers have gone wonky. I will e-mail you as soon as I am up and running. so sorry!

Can't wait to see the scrapbook pages on this little episode!

This made my day! Im sorry poor little Ridge was hurt, but I couldn't help but laugh.

I love it! lol I couldn't stop laughing as read this! The thought of your lil boy arguing how he needed to have the band aids so he wouldn't hurt melts my heart!

Oh my god no! I hope he is ok! Kids are into everything these days. You take your eyes of them for one moment and away they go into something or other! But we do love them lol That little pic of him reminds me of my nephew when he does things like that too :-)

OUCH OUCH OUCH!! He's one tough little dude if band-aids can fix that.