Don't Breed With A Cowboy, You'll Get A Cowboy Spawn!

I realize my blog's been a little Ridge-heavy as of late, but he's been kickin' out the quirky! I promise to post Adventures in Being Rolan soon. It's not like he's been laying low, after all.
Better than Christmas morning all covered in bows, Ridge's very favorite movie came on today, The White Buffalo staring thespian extraordinaire Charles Bronson. This cinematic masterpiece (cue super dry sarcasm) is the engaging journey through the legend of Wild Bill Hickok and Chief Crazy Horse and their hunt of a white buffalo. Why are these two historic figures from the Great American West chasing down this poor animal like rabid dog, you ask? Well, the answer is much simpler than you might think. The evil, treacherous white buffalo is terrorizing Indian villages throughout the countryside, blazing their camps to a fiery crisp along with many, many other murderous crimes. Hell, if this were true, US Grant probably would've made the white buffalo the official mascot of the Indian Wars.
Get back on track, Shonda. Okay, I'm done rambling post-Civil War propaganda.
As soon as the Western flick comes on the screen, Ridge is energized, bouncing on and off his rocking horse, passionately reciting lines seconds before they mumble out of Bronson the Bad Ass's lips. Then he runs to me, flings his arm towards the television, making sure I saw each and every totally believable thing in the movie.
In Rowdy's wicked scheme to dominate the television programming of this house for the rest of our damn lives, he, of course, only cultivates Ridge's love of ridicules old Westerns. The more our children's hearts beat for violent, sensationalized portrayals of the Wild West, cram packed with pitiful acting, the happier he is about it. I'd fight it harder, but in the very least, these movies are teaching the boys to correctly use cuss words, which is my great campaign in motherhood.
If you have, by some holy miracle, missed The White Buffalo, I suggest you watch. No, not because it's any good. It's not. (There's no sense in sending the hate mail, Rowdy Posse. I won't sway on this.) This flick will, however, make you think the shark in the first Jaws is totally legit.
Charles Bronson, "Oh Hell!"
Ridge, "Oh Hell!"
Fine day in parenting for the family Little. I hope I don't get the Bronson boot from the liberal left for letting my kid play with a toy guy, totally un-bleeding heart of me. 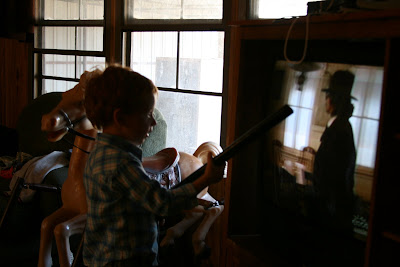 Posted by Shonda Little at 6:17 PM

I am glad to know that I am not the only female that has to be tortured by " The White Buffalo" We have watched this a time or two. Bless our families and our western watchin men!! How about Joshua Jones and Mountain Men...I hear ya sister!

I have never had the pleasure of White Buffalo...I guess I'm lucky?

Yes, that is lucky!

i can't speak to the white buffalo, as i have not seen it.

but, honey.
maybe your life will be smooth as silk. maybe nothing will ever scare you or yours, all day, all night, all your life safe as a bug in a rug. i wish it for you and hope to be true.
but if ever there comes something slithering in a window.
be it a burgeralar ( yeah, i'm from Georgia), a burgeraler, a tornado, evil or disisaster of any kind.
can you tell me true, you don't want a man steeped in westerns?

there has got to be some ease and satisfaction and extra love in knowing your man will lay his life down.