The Spirit of the American Farmer

The alarm clock buzzed at 5 am. As though I was still dreaming, I sprung from bed, turning the damn thing off. Crawling back into bed, I remembered that Rowdy told me he had to be up that early.
"Baby, if you are still wanting to get out of bed at 5, then it's time to wake up," I said, softly shaking his shoulders.
I stumbled to the kitchen for a drink of water. When I returned, he was still half-asleep. I didn't want to go back to bed myself until I knew he was awake. After all, I turned off his alarm without thinking. Rowdy's unfettered will to work even in the most undesirable circumstances has always amazed me, so I knew he would be up in just a second.
Since I hitched my wagon to his star five years ago, my knowledge of agriculture families has taken on a new definition. Most of what I thought to be true before has gone to the wayside, things I didn't even know was done has turned out to be the foundation of farming and ranching.
With our operation, Rowdy has to be a jack of all trades. Before he goes out each morning and when he comes in late at night, he scours the internet for market data. And not just the Chicago Merchantile Exchange either, all of them. He scouts weather patterns and veterinary trends. He mechanics on everything from bulldozers and large tractors to pick-up trucks and plows. His days are long, longer than anyone else I know and I've never heard him even mutter a small complaint.
The rain fell early this year, so he's started sowing wheat. Although no time of our year is technically slow, this is hands down the busiest. The success of the crop is so dependent on Mother Nature, circumstances completely beyond our control. It must be done when it can be done.
I don't know anyone else who saves their vacation time to farm, but Rowdy's little brother Chad (please click on Chad's name for the GREATEST story ever) comes out every year to drive tractors and labor in the unforgiving Oklahoma sun. He lives in Edmond, a suburb of Oklahoma City, with his wife and children. Although he isn't technically involved in agribusiness, he is still married to our farming and ranching success. I'm sure many others are committed to their family's businesses as well, but I think his is particularly true of farm and ranch families. It's not just the notion of livlihood, although that's an issue at hand, but also being a part of the whole, belonging to something larger than yourself. Chad knows the prosperity of our year, or lack thereof, is tied to this expensive slither. Plus, he and Rowdy are closer than perhaps any other two siblings on the globe. I mean, they are like Fidel and Raul Castro, dominating a country, close. Although we do pay Chad for his hard work during this time, there are some things money cannot compensate for. He and his wife could use this vacation time to be off on some lover's retreat together. Hell, he could spend it swaying in the hammock in his backyard. Instead he's caked in sweat and dirt, tending to cattle and plows for us. In fact, Chad's childhood on the farm continues to play such a large role in who he is today, he wrote a song about it.
So, when Rowdy and I were in John Deere, the same dealership my grandfather ran the parts department and worked on many a tractor for nearly 40 years until his death four years ago, I spotted this bumper sticker on one of the office windows. It spoke to me, not in a tripping on acid way, but in a waxing nostalgic way.
Of course, our greatest motivation in this line of work is to provide for our family. But, even though we produces only a small little dent in the country's food chain, it is there, on the kitchen table's of strangers. We know that China already produces 1 out of every 2 vegetables grown each year. We might not be able to match that ever again, but we can at least do our little part. 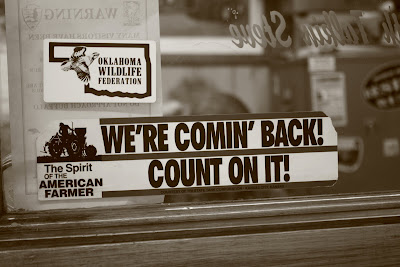 PS--For all your readers who visit my page for my foul-mouthed antics and mishaps, I will be posting one you'll love later on this evening. I promise to dry up my recent sappy behavior.