The day after I posted this "hypothetical" play about a young wife being bombarded for freakin' years by telemarketers and bill collectors for her husband's former live-in girlfriend, the same woman, if only she were real, was at her mother-in-law's house when her husband's ex-wife called to pass on her good news, that she had a song picked up by some musician in Nashville. Now, because this make believe woman's husband didn't reproduce with his former spouse, there had been no contact between them in the decade since they've split the sheets. So, funny that the phone mysteriously rang not 24 hours after this post.

Okay, now put all the hypotheticalness (makin' up words, bitches!) aside 'cause now I'm keeping it real. (Yes, I realize I probably didn't use that term in the correct context. Hell, maybe I did. I just want to look hip. Do I?)
As Rowdy walked through the door for lunch, I noticed that he was carrying in the mail, a liter of envelopes riding atop a rectangle box. Weird, I thought, I'm not expecting a package.
I should've recognized Rowdy's ornery expression, like a little kid attempting to camouflage his eager anticipation as his teacher sits on a hidden whoopie cushion. But, I didn't.
I scooped the mail from him, filing through the paper. After I was done looking through it, the name on the box hit my eye. Shelly Little. Not Shonda Little, Shelly Little. 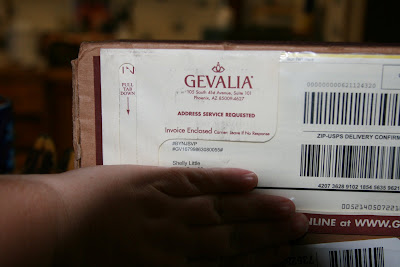 
If you haven't pieced it together yet, Shelly is the name of my husband's first wife, the woman he divorced, like, 11 freakin' years ago.
My eyes darted up at Rowdy. I can see his lips are pinched together like a dam over flooding waters, laboring in vain to hold back rushing laughter.
What the fuck? I ask, giggling in that soundless way you do when you are truly shocked. Is this a joke? Haven't you been divorced since the mid-90s?
Rowdy, doubled over from his hilarious victory of slipping the box to me all super sly, shook his head up and down. He was laughing so hard he couldn't talk. His face was red and his eyes were swollen with tears. Yes, he laughed so hard he cried.
Of course, that was only furthered as I mumbled, Is this fucking for real?
After I stopped grimacing like my superhero Lewis Black and Rowdy finally picked himself up off the ground, I realized what the box was, those fancy schmancy, super delicious Gevelia chocolates.
I stared at the box, deciding what to do with it. Naturally, my first thought was, well, to eat the contents. After all, I don't know how to contact my husband's ex-wife and clearly the mail man doesn't either. Then I thought I should scheme up some witty contest, rewarding one of you, my brilliant readers, with the chocolate pieces of heaven as a prize. But, then I remembered that tampering with mail is a federal offense and you know that I am a rule follower to a T. (Is that T or tee? Clear it up if you know.)
And then it occurred to us, Rowdy's first cousin, who also resides in this itty, bitty town, has a wife named Shelly. Sure enough, the chocolates were hers. We don't really see them that often, maybe once or twice a year, so it makes sense that it didn't register to us at first. Especially since Rowdy's hypothetical ex-wife just called his mom to tell of her recent good news from Nashville. (Congratulations, hypothetically.) Thank God it didn't. Otherwise we wouldn't have had this post.

Posted by Shonda Little at 8:57 AM

Oh, you are funny, Misty. You are her stepsister, right?
Seriously, guys, she is. LOL.

Thanks, Shonda, I try not to advertise the fact that she is my EX, I repeat, EX stepsister!!! Crap, now you told people.