Charlie Sheen Has A Mop on his Head

I have a love-hate relationship with the highest paid TV stars list, which is released annually to remind all us little people what tier of the food chain we are actually on. On one hand, I am fascinated by the ingenuity these beautiful people utilize to convince TV's brightest and most genius producers and writers that, in spite of a show's brilliant contest, it just could not go on without them. That brand of craftiness must be admired, right?
Then, on the other hand, I compare these hefty paydays to, I don't know, the salaries of teachers, nurses and farmers, and the misplaced values of our society are so freakin' pronounced. Maybe we all need Ari Gold for money-negotiating representation. I can just hear it now:
"Listen, you weaselly son of an ass licker, my client Florence Nightingale won't give one more shot of penicillin, she won't wrap one more damn bandage until you get out your pen and your checkbook and double that fucking offer. I've got four other hospitals on the hold, just waiting to scoop up our girl. Now, she loves you, she wants to work with you, but she's got to take care of hers, too, my man. Momma needs a new pair of white shoes, if you're picking up what I'm laying down. These other guys are circling the boat like bloody-thirsting sharks, my man, so if you aren't panicking, you fucking should be. Hurry up 'cause Nurse Nightingale's loyalty will only buy you so much time. Show us the money or we'll show you the road, jack!"
So, when the newest installation of the highest paid TV stars hit the presses, I soaked it up like a frat boy in a strip club. Wide-eyed, mouth gaping open, just staring at the prize.
And low and freakin' behold, there at number 7 was my favorite man boy, Charlie Sheen. Now, before I go any further, I want you to know that I absolutely love Charlie. As you can probably tell from most my posts, I have a special place in my heart for people who "Keep It Real." While the rest of the world, famous or not, tries to stuff our fetishes and dirty little secrets into a dark, dark closet, Ol' Chuck just puts it out there like drinking at 9 am with a team of foreign hookers is something others might frown upon. Truly, he is one of my favorites. Plus, while I whole-heartily believe that marriage with Charlie might be like living through Dante's Inferno, I somehow feel sorry for him for the hell I'm sure he endures at the hands of that harpie he was once wed to. Denise Richards, now that could drive you to drinking. Just a few weeks ago it was revealed that she had, in fact, asked Charlie to father another child with her, a claim she first denied, but then admitted to, explaining that she only did it to make Charlie's new wife jealous.
With all that said, when I saw that Two and a Half Men is now scoring Charlie a quite impressive $825,000 an episode, equaling over $20 million a season, my only thought was this: Maybe now he can get himself hair plugs that DON'T look like a black, stringy poinsettia resting peacefully on his forehead. Seriously, it's like a mop is steaming out of his head.
Now, I'm not suggesting that Charlie has had hair plugs installed (although that is what my gut tells me), but surely I'm not the only one who has noticed the clear change in consistency in his hair patterns. Up until a year or two ago, he had a thick, charcoal mane, reminiscent to me of Ken's of the Ken and Barbie fame. But, that has sadly gone the way of his wildly misspent youth. It is gone and, without the assistance of a seriously expensive procedure, it is lost forever. As you know, I'm no expert on matters of cosmetology. Even though my mother's been a stylist most of my life, my stint in beauty school was a miserable disaster. It was bad and I mean bad. So, I guess I could be wrong about this. I don't think I am, but I could be. I just find it strange that his hair that once combed nicely to the side now flowers out from the center like a giant firework exploding into a tragic cowlick. What do you think?

Charlie before the hair hurricane now atop his head. 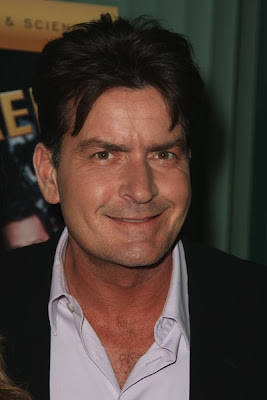 Posted by Shonda Little at 1:44 PM

Ugh, I totally agree about his hair...what the heck is going on there? Birdnest-man.

Do you think it's a bad 'do trying to hide baldness or actually hair plug?