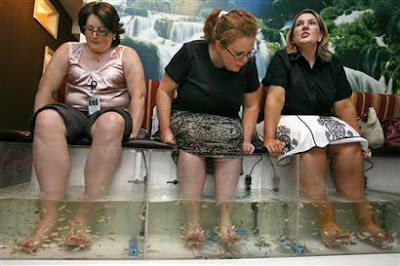 I don't think I would enjoy lots of little carp(even toothless ones) nibbling on my feet. Although I LOVE a good pedicure, I'll stick to the old fashion salt scrubs and soaking. Some things Miranda and I do have in common. Ha Ha.

Well, Well, yet again I am suprised at what I just read...even though I havent given this much thought, I think I would do it. I have always said that I would try just about anything once. If I could get over the extreme giggles that I would encounter from these scaly little bugers nipping at my toes..Yes I belive I would give it a whirl!!

I saw the same artical. The little red toenails with the fish munching on them. Unfortunately, I have been nibbled by a fish or two in the lake. It wasn't pleasant. Surprising, and it made me scream. So, I could see how the fish would munch on the feet. I would be interested because I have never had a pedicure (I know, I'm missing out) on my size 11 feet. I walk barefoot in the yard and stomp through the mud like your messiest little boy so therefore I am a bit apprehensive due to what they might find while they are digging and scraping on my feet aka boats. But, yeah, sounds interesting.

While I've never had a pedicure, I'm a firm believer in trying things at least once. So yeah, I'd try it!

I've been trying for forever to get my husband to get a pedicure and I think this might just be the way to do it! I'm not so sure I could join in on it, but for every woman out there who is tired of looking at her poor working husbands disgusting feet. Here is our chance!!!

I think I would try it at least once, you never know it might feel really good, or give you a good laugh.

I would much rather the fish do my feet than a person. It's the part after the fish I would object too. I can't believe it is socially acceptable to go around letting strangers touch your naked flesh. All these people creep me out with their enjoyment of pedicures, massages, etc. If I am going to put up with someone touching my skin, I better be getting laid. And if I win the contest, donate the money to Lyndi instead. Fuck pedicures.

That is some crazy shit! I can't say I wouldn't do it but I sure as hell know of some people who definatley need it. It would be a feeding frenzy if certain bitches named Krissy and Beth went in for pedicures! Lol! Now Shonda, you know me and my not being afraid to call out these ridiculous people, I do have a potty mouth and Im not afraid to open it...so I had to say it!;) Besides...they were the first people to pop into mind when reading it!
But anyways...count me in! I love pedicures and if there's a chance it could be free...then Im game!

No, No! The idea itself it frightening! Who came up with this and how? I love pedicures but no carp please!!

I would have to say no. I have only every had one pedicure in my life. I just wanted to tell Mollie her comment was hilarious-and Shonda.....love your writing.

So as you know I am a firm believer in a good pedicure!! The carp thing frightens me a little bit....I think I stick to my sweet Cindy and her employees at Fashion Nails!!!

It was on one of the morning daytime shows this morning!!! I was watching it on my way out the door to work. It's crazy! But you know.....whatever!

From the Desk of Derek Baden:
Shonda, you never cease to amaze me with your wonderful word play. Carp e Eat 'Em is the funniest thing I have read all day. I would not personally let carp eat my feet, but if I owned the shop, I would substitute rabid pirhana randomly, for shits and giggles. It would be for my own morbid amusement, and the proceeds that I raised by selling it to pay per view would be donated to Lyndi. Or I would buy a speed boat, the jury is still out on that one.

Okay.. I have never had a pedi and don't really like people touching my feet.. but heck, for free (on my sister-in-law), I'll give it a whirl. As for the fish thing.. I guess it depends on how much Sol I had before. ;) Right, Shonda?

OKay let me just say this...

Next it will be zombies used to eat the dead skin off of something......

Me...I will be spending more time at my dearest friend Mollies.......

I think i will stick to the little razors getting the skin off my feet! The picture did it, it's scary looking. Maybe they should not use clear tanks!

I would have to say no fish. I wasn't sure till I saw the picture and it was really scary! Maybe they should not use clear tanks!

Okay, seriously, I know this is my SECOND comment on this but I just recently painted the exterior of my house and CANNOT remove the paint from my gargantuan tootsies!!

I would definltly try it, I'm sure if you went there to get pedicure when you were having a bad day you would leave feeling much better. But I do have to question the cleanliness? How are you going to clean these fish in between each pedicure? I would have to give it a try though!

I read about this on the way to work one day, and thought to myself how it might really tickle.

Oh Shonda!! I look at it either way...you're getting a pedicure. I myself would much rather just have the person scrape my feet rather than a carp biting my dead skin off. But, also I'm up for trying anything new and as long as they don't hurt you, then it wouldn't be so bad. Eventually, about 80% of the women are going to do it just cause their friend did it. I would be in the 80%.