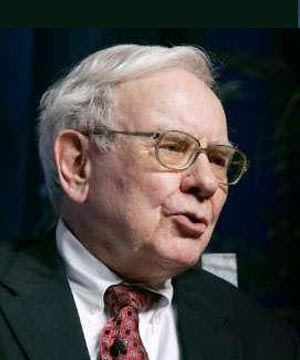 Okay, Readers, I am apologizing in advance for all the lack of good humor and rank jokes on my blog this week. I've been busy and sleepy and, frankly, lazy. So, while I'm still all scrunched faced and serious, I will leave you with a few thoughts and quotes from the richest man in the world, Warren Buffett, who is the Michael Jordan of investing and also a vocal Barack Obama supporter.

On the Bush tax policies and tax loopholes, Warren, a true humanitarian, lamented that in spite of being the wealthiest man on Earth, he only paid 19% of his personal income in 2006, which was (48.1 million), in federal income taxes while his middle income employees paid 33% of their incomes although they made much, much less money.

Buffett believes that the U.S. dollar will lose value in the long run. He views the United States' expanding trade deficit as an alarming trend that will devalue the U.S. dollar and U.S. assets. As a result it is putting a larger portion of ownership of U.S. assets in the hands of foreigners. This induced Buffett to enter the foreign currency market for the first time in 2002. However, he substantially reduced his stake in 2005 as changing interest rates increased the costs of holding currency contracts. Buffett continues to be bearish on the dollar, and says he is looking to make acquisitions of companies which derive a substantial portion of their revenues from outside the United States. Buffett invested in PetroChina Company Limited and in a rare move, posted a commentary[49] on Berkshire Hathaway's website why he would not divest from the company despite calls from some activists to do so. (He did, however, sell this stake, apparently for purely financial reasons.)

Buffett favors the inheritance tax, saying that repealing it would be like "choosing the 2020 Olympic team by picking the eldest sons of the gold-medal winners in the 2000 Olympics". In 2007, Buffett testified before the Senate and urged them to preserve the estate tax so as to avoid a plutocracy.

In his letter to shareholders in March, 2005, Warren Buffett predicted that in another 10 years’ time the net ownership of the US by outsiders would amount to $11 trillion. “Americans … would chafe at the idea of perpetually paying tribute to their creditors and owners abroad. A country that is now aspiring to an ‘ownership society’ will not find happiness in - and I’ll use hyperbole here for emphasis - a 'sharecropper society’.”

Did you get that, folks? Sharecropper society. While Bush has started three wars, Iraq, Afghanistan and the War on Terror (referred to in the Pentagon as the "Long War"), he has mortgaged the entire country to the Chinese to give the first tax cuts in the history of the country during wartime. In other words, Warren believes that we, the people of the United States, have borrowed more money than we can pay back, which in effect sells our nation to our foreign debtors, we will be like sharecroppers. We will be working for a small percentage of the profits, the rest being shipped abroad the folks who actually own us.

Buffett has endorsed Barack Obama for president and intimated that John McCain's views on social justice were so far from his own that McCain would need a "lobotomy" for Buffett to change his endorsement.

With the economic meltdown streaming into every sector of the American commerce, the American people are getting a good lesson in how important the selection not just of the president, but the folks they let head up Cabinet positions. During last week's debate, Barack said that he felt like Warren would be a good choice for the Secretary of the Treasury. My right-leaning husband's ears perked up.

"If I knew for sure Barack would pick Warren and I knew Warren would accept, I would vote for him," Rowdy declared.

Like anyone who follows markets, Rowdy admires Warren Buffet. He's shown, simply, that he knows more than anyone else about the world's finance systems.

The world's most successful investor, the richest man on the globe, Warren Buffet believes Barack is the best candidate to turn around this financial crisis. Warren wasn't born into wealth. From a middle class Nebraska family, he has remained in Omaha to run Berkshire Hathaway. He has shunned the glamour of Wall Street, his home and heart still in the Midwest. He owns no yachts and considers his big screen television as a splurge.

Great post. I love Warren Buffet. Such a smart, no-nonsense guy. And I think it's fantastic when somebody with such a great public image, with so much respect from so many different places, will be vocal about his political beliefs and not just hide.

It's intersting. I do like Warren Buffet but I lack the confidence in Obama, there is just something there that screams trouble. And overall I feel both candidates will lie, cheat and steal to get elected. Nice, right?