Lost in Translation, so to speak 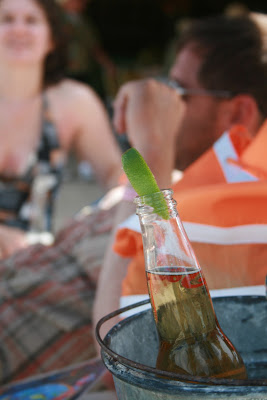 On the days we ported in Mexico while on our cruise, Sol seemed to be our beer of choice. I like Pacifico a little more, but honestly it wasn't as available and when it was, it wasn't quite as cheap. Of course, I've never been a big fan of the Corona, so Sol it was!

Now on the trip, Chad was soaking up this south-of-the-border cervasa with the rest of us and even made the comment that he was going to continue to drink it once he got back to the states. The last morning of the cruise, though, he said he had an upset stomach and credited to the Sol. I agreed that it could be the beer, but might be the quantity, not the quality, that was to blame for this mayhem.

As we drove through Texas on our way home from the trip. we both stopped and picked up a 12-pack of the Mexican brew. Naturally ours was gone within a few days of our return. I mean, Lyndi had been gracious enough to let us park our car at her home there in Norman, so it was only the neighborly thing to do to whip out a couple and share with her, right? Then each day I would have one, longing for the Yucatan.

Well, apparently Chad just now got into his. He called me two days ago and said, "Well, I think I've found out what Sol means in Spanish?

"No, enema."
I thought that was really funny. I've been looking for a reason to post this photo. I thought it really says lazy days on the beach. I had figured it would be on a stressful day with the kids, like, a "Man, I need to be drinking Sol in Mexico," kind of day. But, with that funny phone call from Chad, this is as good a time as any.

Posted by Shonda Little at 9:16 AM