Well, the oil inventory numbers just came in. Keep in mind that crude was already trading at $135, a solid hunksie over what it traded at less than a decade ago. Analysts were expecting a neutral number, neither an increase or decrease in the world's available supply. Boy, where they off on this. On CNBC, any time some report is scheduled to come out, which is often with home sales, credit applications, even freakin' ebay listings, they put a small countdown graphic in the bottom right hand corner to the time of the expected announcement. Just as the clock hit 00:00, the doom on the announcers faces was evident.
The crude inventories came in 4.6 MILLION barrels lower than expected. Instantly, crude rocketed up and the Dow went in the opposite direction. With the housing market still reeling from the knock out punches of last summer and the trickled effect of the Bear Sterns demise, I can't help but wonder how this trifecta will effect the American economy. You might not afford to go the movies or on the earned and anticpated vacation, but you at least now have my witty blog to entertain you. I know that's a comfort.
On the other hand, if you do have to go through the "American Oil Crisis," as the conservative CNBC is now deeming it, there's probably no better place to live than Western Oklahoma. Rowdy and I may have to sell one of our kids to get a wheat crop in the ground, but at least our friends and Rowdy's stepfather can whip out their fat oil dough and buy us a beer for consolation. Talk about job security. All jokes aside, I'm a lover of Western Oklahoma and it really does make me happy seeing this area that is my home prosper.
Several airlines are making moves to 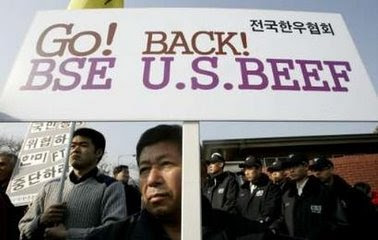 cut down their fuel consumption and some of them sound kind of funny. American Airlines, for example, is debating removing all the backseat telephones, stating that each plane carries 200 pounds of 'em.
Now the South Koreans are out in full force protesting because their government is reinstating their American beef imports. Of course this is frenzied fit is because of the one confirmed case of mad cow. It was over three years ago and the American Beef Industry has gone above and beyond to prove overwhelmingly we will never have another case. For example, if a steer has any trouble walking, he will never make it into the food chain. Turns out, they sometimes break their legs. The leg can be healed, but if it impairs their ability to walk at all, the slaughter houses won't take 'em. The upside is that Rowdy then has more head to feed out here and then sell at cost to our lucky friends. You won't eat a finer steak at the most swank restaurant in Manhattan than you will in my kitchen, thanks to the feeding genius of my husband. American beef is really our only remaining import. Everything else can made, normally cheaper, in other countries. And, sure, they can raise beef in the other parts of the world, but they can't raise the quality beef that we do. Have you ever eaten a burger in Mexico? However, that sole case of mad cow in American, the world's largest beef producer, has been a bargaining chip in the South Korean Free Trade Agreement. Ranchers were offered up on a sacrificial alter for lower import tariffs and Korean a few troops. Thank God they did, too. It would be total disaster if pimple-faced 14-year-0lds had to pay $30 for video game than $25. If you think we will go to war over foreign oil, just imagine if we were fully dependent on foreign food. In this global market, a country must be able to import something to maintain growth and, in turn, independence.
Last night I saw a Wal-Mart commercial promising to cash the stimulus checks, or "China Money" as Mollie coined it, without a fee. And, if you will get it put on some sort of Wal-Mart card, they will waive other fees. Now, let me see if I fully understand this --- We are borrowing money with interest from China to give to American consumers to stimulate our economy (and our stock market, which is cooooolllll with this stock trader) so that they can go to Wal-Mart to buy products made in freakin' China. Holy shit, it's like some weird twilight zone. Remember that picture of the cow eating grass in your science books, with the arrows going into a circle. That's what it reminds me of. And, outside of the short-term, I can't really see this being beneficial to the country, but you know I'll be getting long the favorite retail stores of idiots who will spend their checks instead of saving them. Maybe AutoZone or Pep Boys? Vehicles seem to be the preferred investment of the prudently frugal. Spinners or lift kits or a deafening "system," anyone?
Speaking of shopping, this month's retail numbers come out tomorrow. Just like today, the little countdown will be rollin' away in the corner of the tv screen on CNBC. I'm sure this oil mess won't look positively effect these reports, but who knows? The first round of verdicts on the stimulus checks will be in and, good or bad, you can beat the talking heads will be all a-twitter.
Until then, I'm not putting either of the boys on the auction block just yet. But, we are still three months, give or take, from sowing wheat. Call me then and we'll see. They are cute and they never talk back. They eat whatever you serve then and they put themselves to sleep. And the stimulus checks are going to fix everything.
Posted by Shonda Little at 9:45 AM