My mom came over last night for Bedlam (the Oklahoma/Oklahoma State football game for all you non-Okies and non-football junkies) and I talked Rowdy into fetching the Christmas tree in this rather corny notion that three generations putting the holiday staple would be this postcard-isque memory for all of us. He tried to preach rationality to me, his wife who just happens to be completely immune to absolutely all reason. He said that I should wait until the boys were sleeping or away to put the tree together. Apparently, he's met our sons before and could foresee how this would turn out. I mean, he's no Nostradamus, but he has a pretty telescope for the future than I apparently do.
Well, we got consumed with the football game and the tree didn't get put together. But, since Ridge already has Santa on the brain from the endless loop of The Polar Express he's consumed in the past two days, so he began chanting to put up the tree since he woke up this morning.
Now, before I tell you, my darling readers, what I am about to, you have to promise that, under no circumstances, you will tell Rowdy what I'm going to divulge. I don't care if he ties you up and forces you to sit in front of Crocodile Dundee for 72 solid hours, keep those lips zipped.
Okay, here goes. I'm just gonna do it, like ripping off a Band Aid.
Rowdy was right. I should have waited until the boys were doing anything other than standing beside me when I decided to decorate for the upcoming holiday.
It was a fucking nightmare to say the least, an adorable nightmare I'm sure I will look back upon when Ridge and Rolan are grown all sappy and misty-eyed. But, in the here and now, my nerves were frazzled and those plastic pine needles are scattered across our living room floor like confetti on Bourbon Street the day after Mardi Gras.
Ridge was so excited about the assembly of the tree that his face, all lit up with eager joy, was one big frozen grin. Of course, he was so pumped about all this tree business that he just randomly stuffed the tree pole with various lengths of tree limbs. He put long limbs at the top and in the middle. He cascade short, stubby limbs on the bottom. When Rowdy emerged from our bedroom, which he seems to think is his football playoff headquarters, he quizzed me upon the utter lack of form or order our tree had clearly taken upon. Rowdy moved a few branches to more reasonable position as Ridge rattled off the play-by-play of our decorating as though it was some competitive sport.
I can truthfully say that Rolan, the 2-year-old, didn't place any limbs in the incorrect section of that tree pole. I can say that because he didn't even pretend he was going to use the limbs as a piece of our Christmas tree. No, when Rolan say that limbs on the table, he saw weapons. So, he periodically would snatch up one of the branches and then whack his unsuspecting brother, who would in turn grab another branch and do the same. It was a jostling match, except the boys used fake tree limbs in the place of knives.
As Ridge bounced around with delight and Rolan reeked general havoc, I think Rowdy was secretly enjoying his prophecy's chaotic revelation. He had warned me. He had tried to rationalize with me, obviously an insanely unreasonable woman.
Don't you do dare tell him I said that.
And, as you can see in these photos, all the messes and extra assembly time was well worth it. The boys had fun and, with the tree out in their daily sight, I can start manipulating them into good behavior with threats of Santa Claus. 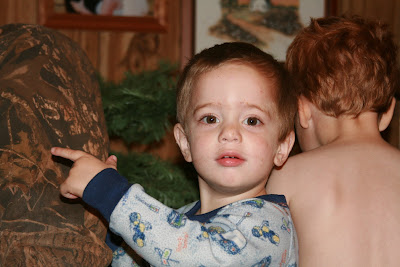 I'm sorry but I might cave after the first 10 minutes of Crocodile Dundee. You should have told my mom since she loves that movie and can watch it endlessly. It's one of the many reasons why I doubt I'm her child.

I could sit through the first Crocodile Dundee, but if you whip out that second one, I can't be responsible for my actions!

Our tree isn't up yet, but all. the. talking. about putting up the tree is wearing me down!

Trust me, I can just imagine it! So hilarious, what the hell is in the Y Chromosome anyway?

I'm rocking back and forth in my chair chanting 'no, no, no' just READING Crocodile Dundee.

BOYS! We should just lock them up during all times of chaos because they just revel in it!!!