I've been a longtime Axl Rose fan. Even when the rest of the world questioned his sanity, when they collectively wagged their disappointed fingers at him for showing up hours late for concerts, when he randomly said on stage that Jon Bon Jovi could, for a lack of more refined words, orally suction his man junk, I shrugged my shoulders and chalked it up to Axl being an eccentric artist. What can I say, we are a quirky and erratic people. That's just the price tag for creative brilliance. Yes, I am putting my random blog and wedding photography in the same category as a musical mogul. I don't care what you say, I totally think it is the same.
Anyways, I've defended my man Axl for a long time. Sure, I've agreed that his behavior at times could be described as unbalanced. But, I thought anyone might hole up in a Malibu mansion and turn into a hermit, the Howard Hughes of music, for like 13 years if they faced constant media scrutiny like Axl has. I would have defended his rationality to the end of time. I could have, that is, until he unveiled this.....the dreadlocks. 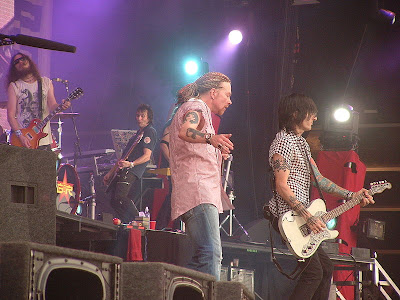 Now, I know we are living in this historic time of liberation from racial barriers, shattering old restraints formerly shackled to race. But, call me closed minded if you must, there are just some things that should always be in place. Now I am in no way saying that the hair style of the beloved Bob Marley should be limited just to black people. No, I'm not saying that all. What I am saying, though, is that dreadlocks should most certainly be OFF limits for people with the same hair color and skin tone as me and Carrot Top and Ronald Mc-freakin-Donald and, in spite of being a hard-rockin' badass, Axl Rose. I can promise you that if my darling son Ridge, who just happens to be also be a fellow ginger, tells me he is seeking a new 'do, I will absolutely fucking never say, "Well, my dear child, I think your red hair would just look fantastic in dreads."
No, of course I wouldn't. I love him, so why would I direct him down such a delusional and disasterous path? I think Axl should be asking himself that same question about whatever fool helped him kink his hair before they
Listen, Axl, you can smash guitars and drape yourself with adoring groupies and make a billion more dollars selling awesome rock ballads. Hell, I'm a fan, I hope you do. But, at the end of the day, you are still a ginger and, even if you are a rock star, gingers just can't pull of the dreads.

On a different, but equally rockin' note, Happy Birthday, Miranda!

OMG that is just too much, I didn't know he went down that road. I'm with you on that one...shave it off dude.

Sweet Child of Mine is one of my favorite songs of all time. And yeah, I'm with you: Axl needs to lose the dreads, pronto.

Thanks for visiting my blog!

Those are just braids and not dreads, he could take them out if he wanted, think he is hiding a receding hairline :)

Preach it, sister! I completely agree. Also, as one who has shunned the plastic, I'd ask Axl to consider a moratorium on that, too!