LOVE is The Hip and Trendy, The Old and Sappy ACTUALLY

Being the tragically old and unhip pair Rowdy and I have somehow morphed into, we are naturally at home on a Friday night. We are not out dancing into the hazy twilight as we most certainly would have been five years ago. But, actually, we are both wildly delighted about this fact, though in front of trendy company we sometimes pretend to desire to someday retake our places on bar stools and dance floors. Nonetheless, we were particularly ecstatic about being decrepit old shut-ins this evening because Love Actually, the 2003 heart-warming flick with an all-star cast. Rowdy is systematically opposed to all movies that can even halfway, kinda, sorta because categorized as a movie that would be filed in near the love stories, but he really likes this one. So much so, in fact, that he let me watch it the second time it came on (Bravo did that thing where they run the same movie back-to-back, which normally annoys me because it is so crap Jean Claude Van Dam train wreck. I love it on days like today, though.)
As we watched it, I whipped out my finely tuned multi-tasking skills, which as you know can be considered primitive at best, and editing photographs from a wedding I recently shot. Cody and Ashlie are a beautiful couple and their shared love is quite visible, even to a stranger. That makes my job much easier. Plus, they wed in a beautiful old church, which added a very romantic feel to the photos. They also did something I've never seen before. As you can see in this photograph, rather than have the minister face their guests, they did.
So with my heart all warm from perhaps the great love movie in history, I wanted to share two of my favorites from this wedding. 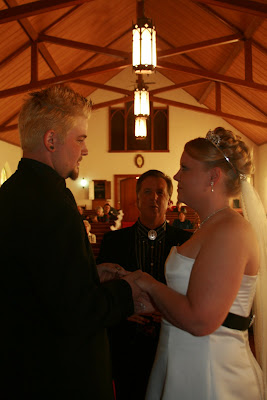 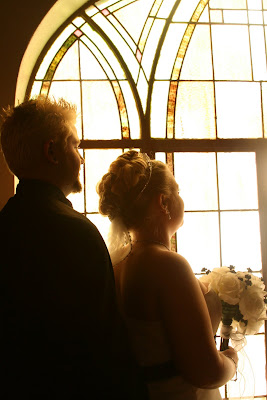 Whenever I get gloomy at the state of the world, I think of the arrivals gate at Heathrow Airport. General opinion is starting to make out that we live in a world of hatred and greed. But, I don't see that. It seems to me live is everywhere. Often it is not particularly dignified or newsworthy. It's always there: fathers and sons, mothers and daughters, husbands and wives, boyfriends and girlfriends, old friends.
When the planes hit the Twin Towers, as fas as I know, none of the phone calls from the people on board were messages of hate or of venge. They were all messages of love. If you look for it, I have a sneaky feeling you'll find love actually is all around us.
Hugh Grant, Love Actually

Love Actually is in my top ten romance faves. It is trumped by Eternal Sunshine, The Royal Tenenbaums, Closer and definitely Zombie Honeymoon.

You know what's not on my list? The Notebook. WORST MOVIE EVER. Whoever likes that movie should try eating shit because I am sure it would leave a better taste in your mouth.

I am going to add that to my myspace now.

one of my all time fave movies...it has my dream hunk colin firth in it. hehe :) i can't even tell you how many times i've watched it along w bridget jones's diary

the only part hubunit, and his friend who was visiting for the afternoon, happened to see was the x-rated movie scene with the stand-in couple.