The Wisdom of Brotherly Beatings

The comic Titus often said that while mothers try to teach their children wisdom, fathers make them earn it. I totally see this in the different parenting approaches Rowdy and I take. For example, while I might discourage the boys from getting near a flame to avoid being burned, Rowdy keeps his lips sealed, insisting that one round with fire will leave a lasting reminder that fire, well, it fucking hurts.
My sons have a rather passionate relationship with each other. Most of the time it is the kind of passion that prompts one sibling to undergo life-threatening surgery to donate a kidney to a brother or sister fighting off death. They protect each other, they get angry at Rowdy and me when we are disciplining the other, they are best friends and playmates. For the most part, the bond Ridge and Rolan share is as strong as a forest of oak trees.
But then there are other times, the times that they are hooked up like two rottweilers tearing each other by the flesh for a scrap of meat. When my boys decide to throw hands, neither one hold back. This is no holds barred combat, a fight to the death, or at least until someone gets hurt bad enough to give in and cry to Momma. And, normally, when I pull the two of them apart, some rinky dink cheap toy is stuck there between them.
So, when they opened a matching pair of toy bulldozers at my mom's this Christmas, I was like a freakin' psychic, foreseeing many a'thumping unleash over these two contraptions.
Naturally, as the person who birthed both of them, I try to discourage these bloody reenactments of Lord of the Flies. Now, I'm not saying that I think Rowdy actually wants them to claw one another's eyes out, but he certainly seems to create situations that he, as a thinking adult, should see will lead to only that. He is constantly encouraging them to wrestle each other or tackle other or some other activity that 100% of the time leads to out-and-out warfare. Fucking constantly.
However, all this time I believed he just didn't think the end game out, that is, until he showed the boys how to have bulldozer fights. That's right, freakin' bulldozer fights.
A few nights ago, I walked into the living room to see Rowdy, the lone grown-up, showing our darling sons how to ram these disastrous toys against each other until one of them was pushed off the table, making one brother the winner and the other a very pissed off loser. Immediately, I snipped something like, "Have you lost your ever lovin' mind, Rowdy?"
Of course, he insisted that this was rather harmless, that they were just being boys. And he stuck by that defense right up until complete and utter lawlessness broke out.
And as I comforted my battered, beaten and bloody boys, I reminded Rowdy once again that they are, as he had just explained, boys. Their instinct simply is to smack each other with big toys until one of them is bleeding and both of them are bawling.
Then he said, "Yeah, but I bet they remember that it hurt." 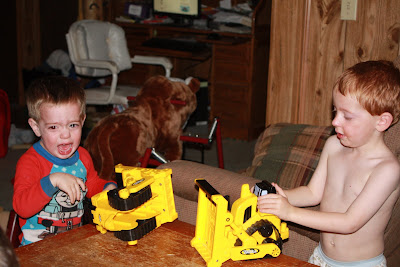 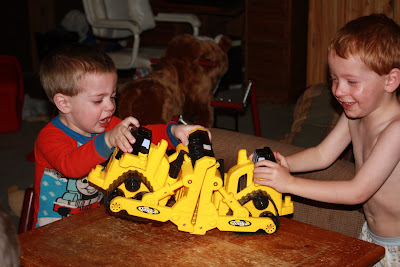 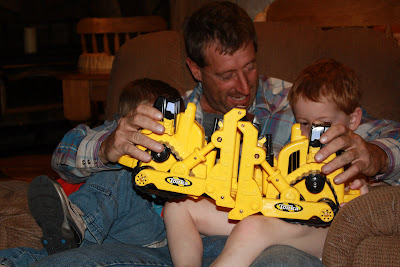 Posted by Shonda Little at 5:47 PM

Currently my baby can't fight back, and forgets that his sister took a toy as soon as it's out of his sight. I'm not looking forward to the day that changes.

Leave it to the men to teach them to fight even more!!!

Ohh... I recognize that look in the 2nd picture. That means "I got hurt... and now... you must die!!!" I think a little payback is in order. Leave those bulldozers on the floor on Rowdy's side of the bed tonight and watch him do some hop, skippin' and jumpin' when he gets out of bed. *snickers*

I have mixed feelings about this one. I should also add that I'm not a parent. For the longest time I used to think that spankings were the only way to get a child to mind you. I was spanked (on my naked ass with a belt) growing up. My sisters and I used to fight the way you described in here, no holds barred. Horrible, regretful stuff.
Now, I'm with a man who wasn't spanked, who is the sweetest, kindest guy I've known.
He's made me think maybe spanking isn't the way to do it, ya know.

I love reading your stuff. It reminds me that sometimes it's not so bad to be single and childless. Because if I was? I would be in jail for that time I lost my mind completely. ;-)

Parenting boys can be bloody business. Someone is bound to get hurt and in this case it may need to be Rowdy. LOL.

Chris is really on to something Shonda. She is experienced in this suttle form of payback. Much to be learnes here.....Hmmmmmm!

Cute photos! Well, remind Rowdy that YOUR way is better, because while "his" way may be effective with fire, it takes hours and hours stuck in the freezer to understand it's COLD! ;-)

Ha, I love it, you have UFC right there in your living room! My daughter gets the crap kicked out of her constantly since she's still too young to fight back. Give her a year and ALL of my money will be on her. Her brother has no idea what's coming.

I umm do not know what to say here! I am childless and grew up with a sister!! We fought! Over what, i don't know. I say Rowdy has to go!!! Once you get rid of him you can train your boys any which way you want to!!!

I love that you take photos of them crying too. Makes me feel not so weird. What? It's kinda funny sometimes.

I know all to well where you are coming from on this one! I try to remind myself that "boys will be boys" and that includes my husband (LOL!)...hell, he's the worse of the three if truth be told!

It's all fair and game until someone gets hurt! I'm glad I'm not the only one dealing with this problem!

That's exactly what my brother does when he comes to town...it pisses me off.

They're going to need to watch a lot of Oprah to counteract the habits Rowdy's teaching them!
pfffft. Men!

Oh, this is a huge dad thing, isn't it! I've seen that face too many times. The good thing is how fast they go back to being each other's best buddies instantly afterward.