Well, You Didn't Tell Me Not to Take the Kids To Beheadings

As soon as hunters can legally pull out their firearms and start blasting away at Bambi and every other creature that Disney's turned into a million-dollar baby, florescent orange and camo clad warriors from all over the country descend upon Roger Mills County, Oklahoma, like a super macho swarm of locust. It's basically just like what happens to Park City, Utah, during The Sundance Film Festival, except high-end fashion is Bass Pro Shop and the only celebrities are the poor, dead deer hauled around in pick-up beds.
The restaurants open earlier and close later. The two local hotels and the bed and breakfast stay relatively busy throughout the year with oilfield customers, but there really aren't any random New Englanders burning their paid vacations out here in the summer. We aren't overflowing with theme parks and tourist attractions.
But, holy fucking shit, if you just happened to drive through during hunting season, you'd scratch your head and wonder if some farmer's wife spotted Jesus's image in her grilled cheese sandwich. The town is literally busting at the seams with out-of-towners. On top of that, my husband may be the only local male inhabitant who doesn't wake up three hours before dawn and freeze his nuts off just for the chance to bring home a buck. My brother-in-law Chad, God bless him, is strung out like a heroin junkie from the deer killin' high he gets from his bow and arrow.
So, it is suffice of to say that, during these chilly weeks in the winter, hunting consumes the community. And, truthfully, I think it's pretty cool because, as I mentioned, my husband doesn't drag home random dead things for me to prepare and Chad's constant jones means we get to see him and his family more often and the hunters give me beer. Really, that's all it takes for me to throw my full support behind anything. Legalize polygamy? Will the polygamists randomly supply me with free hooch? Yes? Well, then I'm down, now give me my Bud Light.
However, today I have a tiny beef with my kids' constant exposure to the Thanksgiving sport. I mean, it has always freaked me out a little when my three-year-old is staring dead at a stiff carcass with its tongue flopping about. But, I push all my bleeding-heart concerns way down in my pansy gut and suck it up. That is, until today.

RIDGE: Hey Momma, Paw Paw got out his knife and cut that deer's head off.

RIDGE: Paw Paw got out his knife and cut that deer's head off.

Almost stunned, I sat for a second and struggled to wrap my brain around this. My darling four-year-old, who might believe he's an ass-kickin' cowboy but still crawls into my bed every night because the bumps in the night send him scampering down the hall, watched a furry animal that happens to be the same species as Bambi and Elliott be decapitated.

ME: Rowdy, funny thing.... Ridge just told me that he saw Paw Paw cut a deer's head off.

JACKASS ROWDY: Well, it wasn't actually Paw Paw, although he was there. Paw Paw's nephew Rory was actually doing the cutting. And....it wasn't with a knife, it was with a chain saw.

ME: What the fuck are you talking about, Rowdy? A chain saw?

ROWDY: Sure, it's much easier than sawing with a knife.

ME: Have you lost your fucking mind? First of all, Rory is 7 foot tall and is built like the Refrigerator Perry. I'm sure that in itself will make this more dramatizing to Ridge. Secondly, a chain saw? Seriously? You let your son watch a deer's head be chain-sawed off?

ROWDY: (Hysterically laughing as though he didn't realize I was on the verge of doing a little beheading myself): If Ridge would've acted scared, I would have brought him home.

ME: Okay, well, if he would have acted scared, you couldn't have erased what he'd already seen from his memory. Also, just because he wasn't freaked out in the middle of the sunny daylight while his childlike curiosity sparked his interest in what the hell was happening to his animal doesn't mean he isn't going to be scared shitless in the middle of the night when bloody images with more tissue, guts and gore than a Freddy Kruger film go running through his head. Do you want him crawling into our bed until his 10?

ROWDY: Alright, alright, I won't do it again.

ME: You won't let our son watch a fucking beheading again?

ROWDY: I love you, honey.


I will blog tomorrow about my many, many gifts in life. But tonight, on the eve of Thanksgiving, I want to write about something I am not thankful for, that my four-year-old attended his first autopsy or dissection or whatever the hell else one might call the gruesome deer hunting chore he was front and present for today. 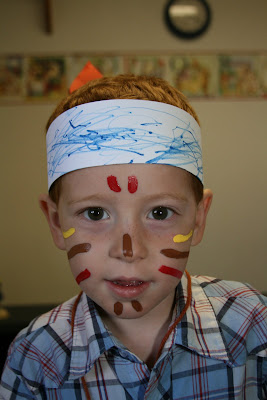 PS -- Don't forget to play in the Shameless Self-Promotion Contest, posted just below this. You could win $25 gift card from Kmart and $15 gift certificate from Chili's.

PSS-- This is my 200th post! That's approximately 189 more than my husband that I'd do. For some reason, he thinks I'm not a follow-thruer. I don't know if thruer is a real word, but screw it, I'm down with making 'em up.

Posted by Shonda Little at 6:58 PM

Sorry your kiddo had to witness that...I wouldn't be down with that either, but I am down with the making up of words, I do it all the time. :D Your little guy looks adorable in that photo.

my youngest daughter would freak..she hates to see animals hurt. she's like me, as long as we're in the dark about where our food comes from, we don't get weird. told hubby the other night that i prob wouldn't make it as a farmer who had to kill their own animals cos i'd never eat it. i'm weird..as long as i don't see the eggs coming from the chickens i'm good. could never have my own chickens. don't wanna see milk coming from cow either.

Such a cute pic! Happy thanksgiving to you and your family Shonda :-)

OMG the nightmares maybe? That's crazy with a chainsaw? Crap why do people like this. it's too much work.

Oh, dear lord! This post slayed me (and almost cut my head off with a chainsaw).

Your blog is AWESOME - so glad you stopped by mine!

Happy Thanskgiving - hope it's easy on the gore...

At least I was 8 before I saw a hog being bled. Poor thing.

And the cats are eagerly awaiting your arrival for the holiday party. ;-)

Your children are totally adorable.

I was laughing out loud while reading this & Trystan wanted to know what was so funny...so I censored it & read it to him! My 6 yr old was laughing so hard he was crying! He thinks he's a hunter...and found the picture of it all in his little head quite amuzing!

Now I know why Lindaloo is enjoying your blog so much. You're funny as hell and a great writer to boot. And she was right - this story was freakin priceless.

And it was totally your fault for never telling him not to take him to a beheading.

I get what you're saying. And I think 4 is too young. That said, be happy that you're not raising children that don't understand cows=beef. I get so tired of dealing with motherfuckers who think that beef somehow magically arrives in their local stores and that no one had to kill, gut, butcher, package the whole deal.

And for the record, I think the bow hunters who go out every morning for weeks are f'ing nuts too. I don't mind hunting a few days a year, but this every day nonsense is just plain silly. Don't they know it's cold out there? And killing deer isn't THAT much fun.