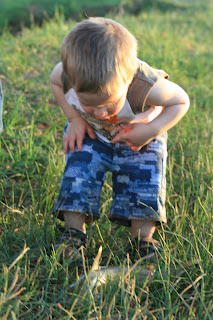 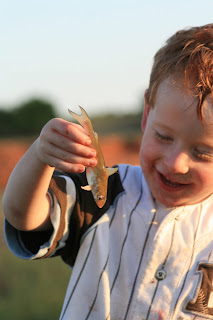 A few weeks ago, Ridge started asking to go fishing, which was odd to us since he's never 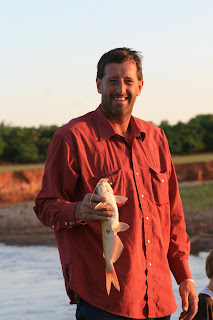 been. Sure, we live a walking distance from the Washita River, almost exactly at the spot General Custer massacred those sleeping Cheyenne women and children. A particularly good day for Ridge consists of throwing sticks into the river, but until recently, that's as far as he got to go.
Then, last Sunday, as though they'd been staunch fishermen since birth, Rowdy was bent by Ridge's sad imaginary fishing, throwing a limp rope over the hill and pretending to reel in a whooper. So, with my Mother's Day gift, a fishing rod (back of ladies, Casa Nova is mine), in tow, Rowdy, Ridge and Rolan set out for the river.
Predictably, Rolan was not much of a fisherman, although the adventure certainly did his heart well. Mud, twigs, grass and a round robin of small, nearly-defenseless animals. Ahh, if Heaven were on Earth, right. So, Rolan spent the bulk of his fishing time alerting the fish to the above ground water by chunking tree limbs into the water and then shrieking with delight at his murky splash. Faster than the water could calm he was throwing sticks into the water again.
Of course, this routine, so amusing to Rolan, did not please his older brother Ridge, a serious fisherman for certain. From the start, Rowdy knew if this outing would bear any success, he would need to have to poles in the water at once: one hoisted upon a plastic pipe/steel pipe combination and drilled firmly into the red clay and then another for Ridge to cast and then reel in about 20 times per minute.
With all the obvious handicaps to the possibility of actually catching a fish that this outing so clearly had, they actually managed to snag a few. In fact, they caught three. One was big enough to drag the pole out of the huge industrial contraption contrived by Wallice. Another one was maybe two pounds, although not quite as big as killer. And then there was the third one. The one who looked as though he belonged in a bait shop and I mean in the refrigerator, not on the trophy wall. However, even with the two larger fish for competition, this small Texas minnow captivated Ridge. He was tickled and entranced at the same time. Fearlessly he picked the flopping fish up by his index finger and his thumb, laughing out loud as the tail swiped his nose. He even took a break from scolding Rolan, whose rock and stick throwing had Ridge teetering on an episode.
After he examined the dainty fish for a few more minutes, he did something that totally shocked his dad and me. He tossed him back in the river. Three year olds don't always do the best of explaining their decisions, so I still don't fully know what inspired this from the humanitarian out to extinguish all gophers. I thought it was cool though.
Since Ridge melted his dad's heart into fishing last week, they've been regular Captain Ahabs. Normally they sneak away while I cook supper. As always, Mom misses the good times. I don't need to go down to the river to know what's happening anyways. Undoubtedly Rolan is chunking various rocks, sticks, limbs, pebbles and even manure into the water until his little heart almost bursts with glee. Undoubtedly Ridge is scolding him for scaring the fish, although this holds no bearing on Ridge's own good time or even him requesting Rolan stay home the neck time. Each day they catch a few new fish to add to the collection forming in my deep freeze. With mud in nooks and crannies I didn't even know they had, their smiles shine. Yes, they are fishermen.
Posted by Shonda Little at 1:02 AM

This blog made me ball like a baby! I think Grandpa told Ridge it was "time" to fish, he had us fishin by that age. I was his age when I caught my first perch out at Gregory's. I love to fish to this day, it is my reset button. I might come and fish on your river if you will let me sometime. I would love if yall could come to Black Kettle with us sometime. Who knows, maybe I love fishin so much because I am with Grandpa when I fish. I think he fished because it was his reset too. I might not look like the rest of the Twyman's but I have Grandpa's heart and his love for the outdoors and creating...and thats more then plenty for me. I love you cousin and we need a fishin date!

Sounds like Ridge has seen a fishing show or two.
They only film the fishermen practicing catch & release.
I'd love to see an outtake clip from one of those shows.
The guy says:"Cut the camera. I'm taking this sucker home!"